Remember after The Craft came out in the late 1990s? It seemed like half the teenage girls you met wanted to be witches. It was a bit silly but also kind of cool. Witches who’d started practicing in the 1980s, after writers and publishers started answering to the growing interest with books that aided the movements development of a common lingo (like Margot Adler’s Drawing Down the Moon, Starhawk’s The Spiral Dance, and Marion Zimmer Bradley’s The Mists of Avalon, a sociological survey, a goddess-worshipping primer, and a feminist Arthurian novel, respectively, all published with one three year stretch), mostly welcomed the new generation of witches, though there was a bit of concern that there was less focus on reading and more on imitating Hollywood imagery. Witch fashion was never the same after The Craft, then came Xena: Warrior Princess (perhaps one of the most influential costume aesthetics ever, now shamelessly imitated in movies and TV), and Buffy the Vampire Slayer and Practical Magic and the witchy media darlings just keep coming.

At the time of The Craft‘s premiere, in 1996, witchcraft and paganism were also just beginning to have a wider presence on the internet, thanks in large part to The Witches’ Voice, a news and networking site founded by Fritz Jung, Wren Walker and, to a lesser extent, little old me. Originally formed in response to cases of discrimination against pagans and witches, the Witchvox site, which saw millions of hits a month and was profiled in major news magazines like Wired, is no longer the hub of activity it once once, as social media has largely taken over the interactive functions it once had (though the networking information is still there and the entire archive of articles is still there). Witchvox also started a Facebook page where news stories are posted, and the outreach is still huge, even if the comments section, on a good day,  can make you feel like reaching for some chamomile tea and a big chunk of hematite.

In recent years, witchcraft as a trend in fashion, TV or other areas of culture has come and gone, but in 2018, twenty years and one generation after that Craft-borne tsunami, witchcraft is again a huge phenomenon. At some point when we weren’t looking, witchcraft became all trendy again…and quite shallow, apparently. It used to be about devouring books on mythology, folklore, magic, nature and comparative religion. Now, as this recent article in Allure demonstrates, it’s all about self-care and crystals and Instagram. The article offers some interesting links for more info, and some good dispelling of misconceptions. But I found myself intrigued by the fact that the kinds of “myths” that apparently need dispelling today are very different from the ones we needed to dispel in the 1990s.

For example, one myth the author (Sophie Saint Thomas) explores is that “your witchcraft should be Instagram-ready.” Reading this, I appreciated the caveat that witchcraft was not necessarily for public consumption, nor did it have to be a picture-perfect layout fit for a magazine. But this concern about how one’s spiritual practice looks on social media is a far cry from busting the myth that “witches worship the devil” which was the number one thing we were having  to debunk twenty years ago. Being a witch is now mainly an expression of self or persona to be consumed by others, instead of a practice for self-transformation or method of engaging more deeply with nature. Some “Wiccans” might be appalled to see very little emphasis on, or even mention of, gods and goddesses in the media mentions of the witchcraft trend.

There is also not much mention of the “pagan community,” because witchcraft these days is now more of a solitary activity shared with others via digital photos (echoing the days in the 1990s when people who felt isolated from other like-minded practitioners and afraid to be too public about their witch identities welcomed the opportunity to network online with other witches in their areas so they could meet up in person; imagine!) Gotta say though: given the infiltration of racists and other jerks into the online pagan community these days, I’m feeling like the Instagram witches are smart to keep things more individualized, even if much of the visual representation of today’s witchcraft feels fairly homogenized. The aesthetic is Goth-meets-Goop-meets-Magnolia Pearl.

How are us “old timers” and Gen X witches feeling about this burgeoning social media witchcraft trend (nicely outlined in this article from 2016)? The positivity is good. The visibility is helping normalize what many still see as a fringe religion or strange hobby. But is the lack of awareness of, or interest in, the pagan movement’s history a problem?

I recall wanting to learn everything I could about the beginnings of the witchcraft movement, starting with Wicca, and Gardner, and eventually exploring the roots of what he cobbled together to create what we now know as modern pagan witchcraft. Historians and academics like Ronald Hutton, Diane Purkiss, Tanya Luhrmann and others have lent an air of legitimacy to the movement’s rich and complex underpinnings. Bu that was back when people were reading books. A lot. As the cyber landscape changed, pagans engaged: in newsgroups (remember those?), on MySpace, on Livejournal, in blogs, on podcasts (which died out for a bit but now are back with a vengeance).

And now, many witches and pagans get their information from social media memes on Facebook and threads on Twitter, ideas on Pinterest, influencers on Instagram, poems and art on Tumblr, and other electronic platforms I’m probably too old and out of touch to know about. (I’m only half kidding; your media witch is relatively tech-savvy, but I miss the days when journaling and reading books and writing out spells in calligraphy were my main interactions with the words of witchcraft). 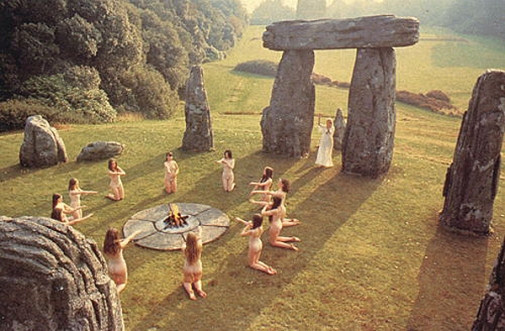 A Beltane fertility circle in The Wicker Man (1973)

For the witches of the zeitgeist are young. They’ve seen The Craft, but not Rosemary’s Baby or The Wicker Man. They’re more likely to be seen at a “burn” than a Renaissance faire. They’re not reading books by Starhawk or Scott Cunningham, but they are reading Witches, Sluts, Feminists and other tomes about witchcraft as activism (which is good). They may not be environmental activists, but they’re quite possibly vegan. And the spokespeople of this new movement seem to be part of that generation known as “millennials” (a word I don’t really like to use, as it feels vague and dismissive).

There’s nothing wrong with passing the torch to a new generation (it’s happened several times since Wicca first made its way over to the US in the 1950s;), but in my experience the pagan community’s tendency to value the contributions of every generation seems to be less of a thing now. The emphasis is on youthful energy and glamour. Even the stunning magazine out of the UK, Sabat, in its “Crone” issue, featured photos of women who were all obviously under the age of 30, and essays penned mostly by women younger than 40. I recall being relatively uninterested in the crone archetype before I turned 50 (which wasn’t very long ago, my lovelies), but also maybe afraid of it, and to give Sabat its due, the “Crone” issue does a fair job of meditating and speculating on what is to come in the autumn years of the witch, making up for what it lacks in more authentic narratives or images. The excitement surrounding this beautifully-produced magazine extends to other artistic permutations of the current witchcraft craze, like online magazines LunaLuna  and Faerie, or podcasts like The Witch Wave and Down at the Crossroads.

So where is this going? Where should it go? What pagan and witch voices and people do you follow? What would you like to see more of?

8 thoughts on “The Young Ones: Witchcraft’s Glamorous New Practitioners”