Greetings witches, pagans, nymphs, sprites, druids, daimons, and denizens of the dark forest realms of magic etc etc. Happy October! It’s been a while, and your witchy media correspondent has had a very busy and crazy year. Good news though: there is so much witchy media out there it is hard to know where to begin, and I have no doubt I will be adding to this list soon, so watch this space. Witches are very much in the news lately, and witchcraft is very trendy on social media and pretty much everywhere, and I realize we may all have mixed feelings about that, but one sure sign ‘o the times is the number of witches we’re seeing at the movies and on television. 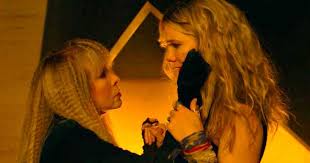 Stevie and Misty, together again!

First off, if you’ve been watching American Horror Story: Apocalypse (on FX), you know it’s gone from being a rather silly and snarky (and not terribly interesting) end of the world scenario to a flat out war between the witches of AHS: Coven and a group of fabulously-dressed warlocks in an underground bunker somewhere in the desert. It’s not entirely clear where it’s all going, but they brought back Misty Day and Stevie Nicks sang to her and that certainly should have happened the first time around! Fiona Goode will be back this week. The witchery is delicious in this season, and I will keep watching. Working on a review and will be posting my weekly thoughts soon. The notion that the end of the world will be bought about by a feud between witches and warlocks is…interesting, no?

The new Charmed reboot looks great! I see that huge grimoire is still a thing.

The new reboot of Charmed premieres TONIGHT on CW. There’s been much talk of this already (some of it asking, simply, do we really need this reboot?), but the casting is bold, and the shifting of the characters away from white to Latina promises to be interesting at the very least. Will you be tuning in? Share your comments! I’m looking forward to it, even as I was not such a huge fan of the original series; but obviously my opinion did not matter since it ran for almost a decade! There was some controversy when the reboot was announced, mainly from former actresses who felt their input was ignored (since they were all involved in storylines and production decisions during the original series).

The remake of Suspiria (Dario Argento’s cult classic about a secret witch cult at an exclusive dance academy premiered in 1977) is wowing audiences at film festivals around the world. It premieres in the US on October 26th, going nationwide on November 2. Directed by Luca Guadagnino (Call Me By Your Name and I am Love), this is already drawing rave reviews for its lush visuals. It stars Tilda Swinton and is full of witchery and that’s enough for me; I’ll be seeing a premiere of it in New York the day before my birthday! Do see the original, too; it’s wonderful, and lead actress Jessica Harper also makes an appearance in the remake. 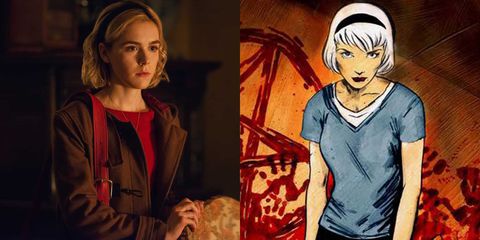 The new Riverdale spinoff, hot on the heels of the show’s third season, which promises to have some dark, occult undertones (or is it overtones?), is the eagerly-awaited Chilling Adventures of Sabrina also premiering on October 26th, on Netflix. Starring Mad Men‘s Kieran Shipka as a sixteen year old who is forced to assert her witch identity even though she is half “mortal” (does this mean witches are immortal?), the series features a fabulous eclectic cast (including Mirada Otto from the Lord of the Rings trilogy), beautiful visuals and a heady mix of humor and horror. I’m only one episode in, but it’s very promising, and I am planning to have my review up this week!

There’s more to come, believe me! Still planning to review Apostle, Killing Eve, and some other new TV shows, and I’ll post some Hallowe’en week movie suggestions as usual, but is that enough to get you excited and in the mood? I hope so. Let me know what you’re watching and please share your suggestions.